In our most recent grey-skied Taiwanese escapade, we headed out to the tea-infused, mountain-town of Pinglin, intent on renting a bicycle and free-wheeling our way out into the endless tea fields. 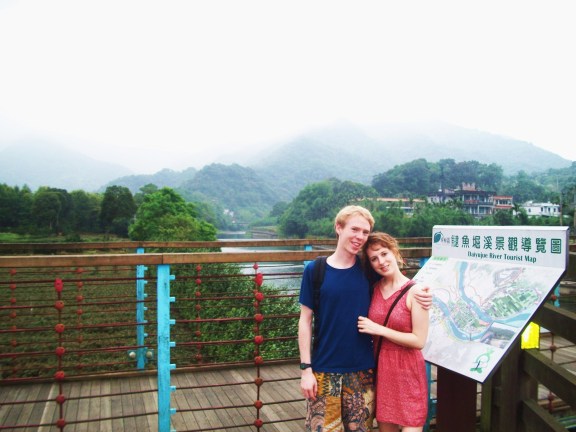 After a bus ride that resembled a joyless tour of Taiwan’s grimmest electricity pylons, we disembarked at Pinglin only to be met by a despondency-inducing mist -as has often been the case with our day-trips recently. Peering through the gloom, we were met by incomprehensible Chinese signposts and illogical maps. Given our predicament, we took the only sensible next step and decided to follow an attractive young lady in a bright yellow top. I can’t offer any reasonable explaination for this decision, except maybe for us the yellow of her top was a substitute for the lack of sunlight in our lives. She led us through a deserted and unremarkable “old-street,” which was more “old” as in decripid than “old” as in traditional. However, our trusty yellow star led us safely to 7-eleven, and from there we were able to spy a bicycle rental shop. 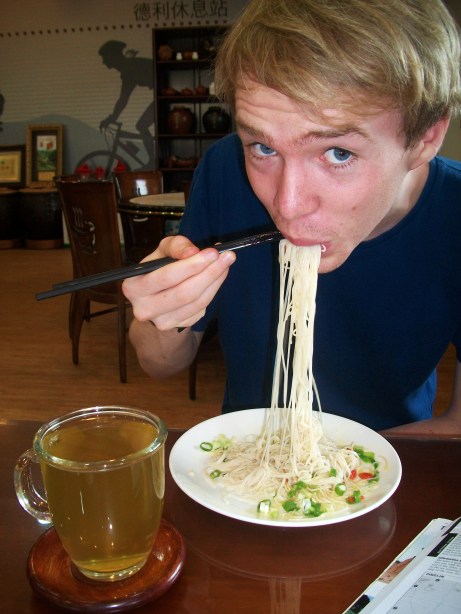 We shovelled in a delicious plate of local tea-oil noodles, guzzled down a mug of local BaoChung green tea, and jumped on our red bicycles. We were off to a flying start when shortly after we gave the brakes an experimental squeeze and were nearly slammed over the handlebars at breakneck force. We should have anticipated this, given how over-zealous the Taiwanese can be about health and safety, but my previous experience with rental bikes had me doubting whether the brakes would work at all. Never mind, onto the renowned cycle paths of Pinglin!

Only, in a cruel twist of fate, there were so many pedestrians at the beginning of the cycle path that we could barely move. We hefted up our bikes, carried them down some steep stone steps to the riverside, only for Charlie to look back and see the smooth bicycle/wheelchair slope. For a while, we spent our time awkwardly backpedalling away from older folks, with Charlie reluctant as ever to ding her bike bell. However, once we had put some distance in, the  crowd dispersed and we had the riverside to ourselves. Cycling with the earthly tea-fields on one-side and the quasi-pristine river on the other was a nearly transcendental experience, a metaphor for travelling in general, which more than compensated for earlier inconveniences.

Eat: Tea-oil noodles. Delicious and green!
Drink: The BaoChung tea, which can be seen growing all around, shouldn’t be missed. A bag can cost thousands of dollars, but a mug is only NT$100  (£2.20).
Cycle: Rentals are good-quality and very reasonable at NT $100 for the first hour, NT $50 afterwards.
Hike: There are two hiking paths reachable from the centre of town.
Swim: The water quality is as good as it looks. There are rumors of inner-tubing in the region too.
Read: Tim and Mal at Adventure Smells’ Double Feature: Pingxi and Pinglin.

How to get there?

Take the MRT to Xindian. Buses go to and from Pinglin every 30 minutes. Ask the friendly (English-speaking) lady at the tourist information which one to take because we have no recollection of the bus number.

3 thoughts on “Wheel be Back: Cycling in Pinglin”